Stream the New Album "Moth To The Flame" HERE!

“Gelman is the poster-girl for the solo, storytelling singer-songwriter. this performer will likely always have a captive audience.”
- Music Connection 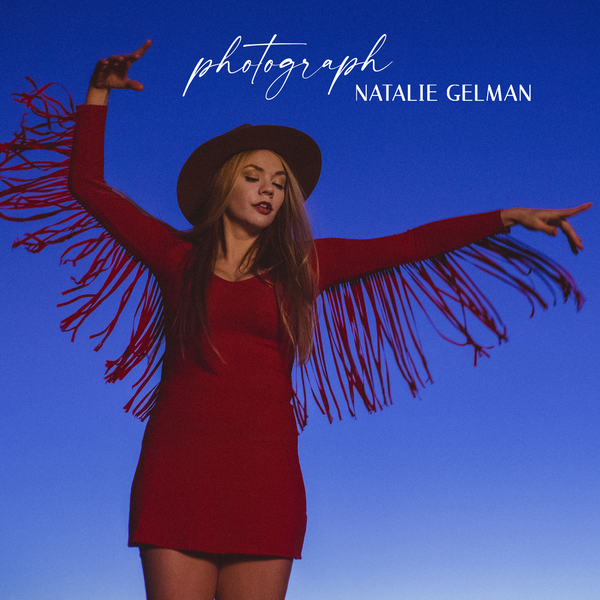 Listen to Natalie's newest single Photograph, out everywhere today! This is the third release from Moth To The Flame, her full length album coming out on June 18th. Pre-order the album and album merch here.

The music video for Heavy Heavy Heart is out now! Be sure to watch it on YouTube!

Heavy Heavy Heart, the second single from Natalie's upcoming release, Moth To The Flame, is out today! Find streaming and download links to listen to the song here.

Natalie released a collaborative music video today for her new single Better Days. The video features home videos that hundreds of people sent in from all corners of the world. Videos spanned across all 50 states and all 7…

Better Days is out today! This is Natalie's first single from her upcoming full length album to be released this summer on Blue Élan Records. Listen to it on all streaming platforms by clicking here. You can also subscribe…

Natalie was featured in the latest edition of Music Connection in Signing Stories. Check out the interview and article on page 26 in the March 2021 digital edition or pickup a physical copy on newsstands and Barnes & Nobles across…

Natalie's take on Never Be Lonely by America was released today. Penned by her label mate Gerry Beckley, Natalie's version is dark and moody nodding to the "edgy undertone" she saw in the lyric that reminded her of the character…

If you haven’t watched the music video for Natalie’s new single “2020” what are you waiting for? Watch it now...

The song and video have been well received by fans and press. Here’s a few quotes and links to check…

Natalie's new forthcoming album, Moth To The Flame, has been picked up by Blue Elan Records to be released in Spring 2021!

Natalie said; "I'm so excited to be part of the Blue Elan Records family!! Thank you for believing…

"Whether she’s playing the guitar or the piano, Gelman conjures every bit of emotion from her instrument. It’s not about solos or extended instrumental interludes here though; it’s about giving…

Natalie was selected to play an official showcase at Folk Alliance International 2020 in New Orleans!

Natalie will be featured performing on ESPN tonight on Monday Night Football Rams vs Ravens! Be sure to catch the game, she'll be on singing the theme song as they come back from commercial break in the 2nd or 3rd…

Natalie's was interviewed by Racing to End Alz about her mother and journey with her Alzheimer's disease. Find out more about this amazing charity and read the story here.

Natalie chatted with LAWeekly about her music and upcoming projects! Check out the interview!

Natalie's newest music video for The Lights Upstairs released for Alzheimer's Awareness month was premiered by PopMatters! She spoke to Jonathan Frahm about writing the song and her experience going through Alzheimer's with her mother. Read the article on PopMatters…

Natalie's new song was released in support of Alzheimers Awareness month. 'The Lights Upstairs' is a heartfelt song about Alzheimers and Dementia that Natalie wrote for her mom. It's folk-pop style is uplifting and sweet as the songs…

Out of 120 NYC street performers chosen to participate in Live.me's Streetbeat's competition Natalie won the grand prize of $10,000 and was surprised with the chance to sing with and open for non-other then Wyclef!

Natalie was chosen to open for Bon Jovi on Feb 28th at the Golden 1 Center in Sacramento as part of his This House Is Not For Sale Tour!!! Get tickets now!

Natalie's collaborative song written on Hookist is now available! Watch the live video, recorded at Hill Country Live in NYC and download the studio version of the song at

The Huffington Post interviewed Natalie at a recent show! Read the interview here!

Natalie will be playing two sets this weekend as part of Concerts at the Races Friday Nov 4th at 1pm and 3pm at Santa Anita Park!

Natalie's 3rd annual free album is out! Live at the West End Theater features 7 original songs recorded in Quincy, CA. Download it for free by joining her email club above!

About "Moth To The Flame"

Attraction is inexplicable. It’s pheromonal, quasi-spiritual, physiological and physical. For songwriter-pop artist Natalie Gelman, the pull to music has almost been innate. It has been there since she was an eight-year-old girl with an absent father and an overworked single mother. Back then, she freely roamed the wilds of New York City, stoking the fire of her artistry, spurred on by violin and piano lessons, and her innate singing and songwriting gifts.

The Ojai, California-based artist has aptly titled her milestone release, Moth To The Flame. This is her debut full-length for Blue Élan Records, and it features 11 co-writes with producer Charlie Midnight (Joni Mitchell, Katy Perry) who was an early champion of Natalie’s talents as a singer-songwriter. It has the added distinction of being mixed by Grammy award-winning sound engineer Jason Mariani (Lissie, Mumford & Sons); mastered by Grammy award-winning engineer icon Bernie Grundman (Michael Jackson, OutKast); and it features a band handpicked-by-Natalie of ace musicians with resumes that include working with such artists as Patty Griffin, Fiona Apple, Brandi Carlile, and more.

Moth To The Flame was born out of struggle. Looking to take her career to new heights, Natalie set out to do something different than she had done before, and that meant building an album with precision and direction that would be uncompromising in its execution and creation. This proved to be an arduous task; to record with the team she hand selected meant bending her life to the schedules of many. Long, late hours in the studio; days, weeks, and even months between recording sessions can prove overwhelming to many artists, but Natalie so believed in her vision she refused to settle for anything less than perfection.

The 13-song album represents a rare artistic feat. Moth To The Flame is a sublimely melodic and heartfelt blend of polished production, telepathic musicianship, and finely crafted pop with emotionally raw lyrics and storytelling. “I feel an everlasting draw to music, sometimes at the expense of the rest of my life. Like a moth to a flame, I continue to drive towards it, even when the price is frustration or pain. Sometimes we need to experience adversity to truly appreciate our purpose, and music is that purpose for me” Natalie says.

Her latest release, Moth To The Flame, opens with “Photograph,” a potent dose of songwriter-pop with ethereal verses that yield to anthemic choruses. “I wrote ‘Photograph’ about never giving up when the odds are against you; it’s a love song to my audience,” she says.

Other album highlights include “Heavy, Heavy Heart,” “The Answer,” “Better Days,” and “Won’t Matter Anymore.” “Heavy, Heavy Heart” exudes a sweet Americana melancholia with lyrics that are both uplifting and thought-provoking. “This song is about how we can become our own worst enemies or our best friends based on our self-talk. We look around and think we’re the only ones experiencing something, that the growing pains of life are unique to us alone, but many people struggle with the exact same things,” Natalie shares. The empowering but tender track, “The Answer,” features sweetly sensual vocals and atmospheric-pop production. “Better Days” opens with a Motown-y bass hook and then blossoms into balmy, uplifting pop-rock. This track’s feel-good energy is harnessed in its video that promotes connection, inclusion, and unity. “This one really sums up the message of my music and my philosophy on life. I really believe in not giving up -- especially on yourself. We’re at our best when we work together and lean on each other” Natalie says.

The concluding track, “Won’t Matter Anymore,” is a country-tinged song boasting soulful harmonica lines and the album’s most stirring vocal performance. Here, Natalie’s chorus lyrics are bravely honest. She sings: But everyone’s got something to hide/Some get convicted before they are tried/All the stupid mistakes you did or didn’t make won’t matter anymore/Everyone’s got some secrets to tell/mine just happen to be yours as well/And it won’t matter anymore, it won’t matter anymore. Natalie reveals: “We all have secrets. We may never know the truth, but we have to choose what is important. In this case, having the relationship is more important than having the pain of the past and never having a real answer.”

Natalie grew up surrounded by classical music. She studied violin, and attended the famed LaGuardia High School of Performing Arts where she studied under educators from Juilliard, and was featured as an opera singer. During this time, Natalie performed as a soloist at Carnegie Hall, Avery Fisher Hall, and other esteemed venues.

A chance finding of a guitar behind a friend’s couch changed everything. The instrument became an extension of her body as she took guitar lessons, and nurtured her songwriting gifts. “I used to fall asleep with my guitar,” she recalls with a good-natured laugh. “When I woke up, I was always so grateful I didn’t toss and turn and break it.”

Natalie earned a degree in Vocal Performance from the University of Miami. Upon graduating college, she set out on her path as a songwriter, releasing her debut album, and embarking on her rollerblade tour back home to NYC. There, she became a fixture in the gritty subways—a circuit she began to master when she was just 16—and a mainstay at the city’s storied venues. From there, she inspired a sing-along crowd of 17,000 while opening for Bon Jovi on a coveted opening slot she earned from a songwriting contest and beat out 120 subway performers to open and sing a duet with Wyclef Jean.

To date, Natalie has released a self-titled album, an EP, and four singles. Select press praise includes Huffington Post raving Natalie is “sunny and soulful”; The New York Post gushing she is “simply terrific”; PopMatters concluding “all listeners will enjoy how Gelman pours out her soul”; and Billboard weighing in “fan reaction confirmed that her intimate songs play well in an arena setting.” Natalie earned a feature on the front page of the NY Times; and interview features in LA Weekly and Songwriting Magazine. Natalie’s most recent single, “2020,” has been added to Apple Music’s coveted “Hit Reset Playlist,” and has been enthusiastically reviewed.

Natalie looked to build on those early successes by creating an album that would define her as an artist, but it would ultimately take years of concerted effort before Natalie would find Moth To The Flame in its fully-realized form. She is quick to admit the toll the arduous process had on her well-being. Many opportunities to take easier paths presented themselves. In greater numbers were the chances to throw in the towel completely.  The obstacles, the personal challenges of taking care of an ailing family member, the professional challenges in the pursuit of perfection, Natalie willed her way through for the sake of the music. “The truth is, giving up has never felt like a real option” Natalie exclaims. “Music is a life force for me, I’ll find a stage, street corner, or subway platform to perform on, no matter what stands in my way.”

Her never-say-die work ethic has paid off for Moth To The Flame as Natalie is now supported by a full team, and she’s issued her most assured artistic statement to date. “I have put years into this album. While working on it, I got married, lost my mom to Alzheimer's, and had the opportunity to open for major artists,” she says. “The songs on the album were written before going through those things, but the pain and passion are in the performances and recordings. These songs have taught me to focus on the love you can give and the integrity with which you live your life.”